(Disclaimer: Market data is changing rapidly. The following newsletter incorporates accumulative data and may not fully represent current market activity and direction. Please contact your Real Estate Agent for the most up to date statistics.)

Quick Take:
Note: You can find the charts & graphs for the Big Story at the end of the following section.

More opportunities for buyers in a less competitive market

Buyers acted in their financial interest remarkably well between 2020 and 2022, evidenced by the type of financing buyers used to purchase homes during that period. The average 30-year mortgage rate reached record lows in the third quarter of 2020, dipping below 3% for the first time ever. The super-low cost to borrow priced more potential buyers into the market because of the massive increase in affordability. For example, if you can afford the monthly payments on a $500,000 loan at 6% (~$3,000/month), then you can afford a $700,000 loan at 3% (~$3,000/month). Homebuyers, in a sense, could afford more home, so conventional loans rose to the highest level since 2006, and prices rose at the fastest rate in history. Importantly, prices rose quickly, but buyers weren’t getting priced out of the market because of the outsized effect interest rates have on affordability. Financing through conventional loans remained elevated through Q1 2022, which marked a sharp increase in mortgage rates and inflation.
The changing economic environment in Q1 2022 wasn’t lost on cash buyers, either. Inflation was moving higher and depreciating the value of a dollar, which caused all-cash home purchases to jump to the second-highest level on record (just below the all-time high reached in 1988). Buyers’ money was worth more, so spending in the near term had more value. We recognize that cash purchases are far less common, but those who could pay cash chose wisely. We expect all-cash purchases to stay elevated, as mortgage rates will likely remain in the 5-8% range for the foreseeable future. It should come as no surprise that cash purchasers typically have an edge, and that remains true now. However, the typical buyer who finances part of the cost of the home has more opportunity than expected this year.
Competition for homes typically softens during the winter months because people focus on the holidays and tend to be less active because of the colder weather and shorter daylight hours. Add in 15- to 20-year-high mortgage rates, prices still near record highs, high inflation, and worries over a recession, and let’s say the competition over homes tends to decline further. This year, sales have dropped every month since January according to the National Association of Realtors, a 32% drop overall. If this trend continues through the rest of the year (current data ends October 2022), which it almost certainly will, 2022 will have about a million fewer sales than 2021. Of course, 2021 had the largest number of sales since 2006, with nearly a million homes sold above the long-term average. With that in mind, it stands to reason that about a million fewer homebuyers than average would be in the market in 2022, especially when considering that financial incentives to buy ended abruptly at the start of this year. We were still surprised to see inventory rise in October after inventory appeared to peak in September.
The housing market has seasonal trends during which home prices and inventory generally rise in the first half of the year and fall in the second half. We will likely have more homes on the market than expected this winter, in a less competitive market, giving buyers a greater chance of finding the right home. Sellers are often buying in conjunction with selling their homes, so more inventory also benefits them.
The U.S. housing market has certainly shifted throughout the year, and we must recognize the current conditions homebuyers and sellers face. Of course, different regions vary from the broad national trends. Take a look below at the Local Lowdown for in-depth coverage of your area. As always, we will continue to monitor the housing and economic markets to best guide you in buying or selling your home. 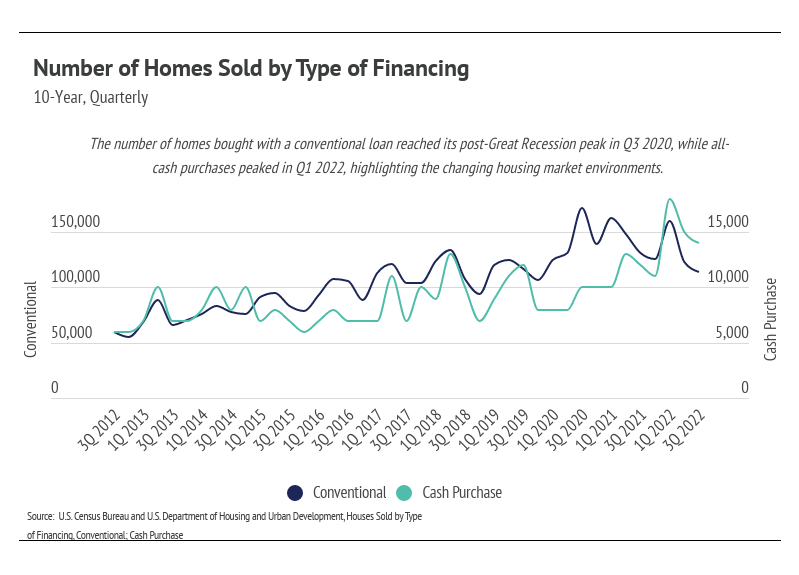 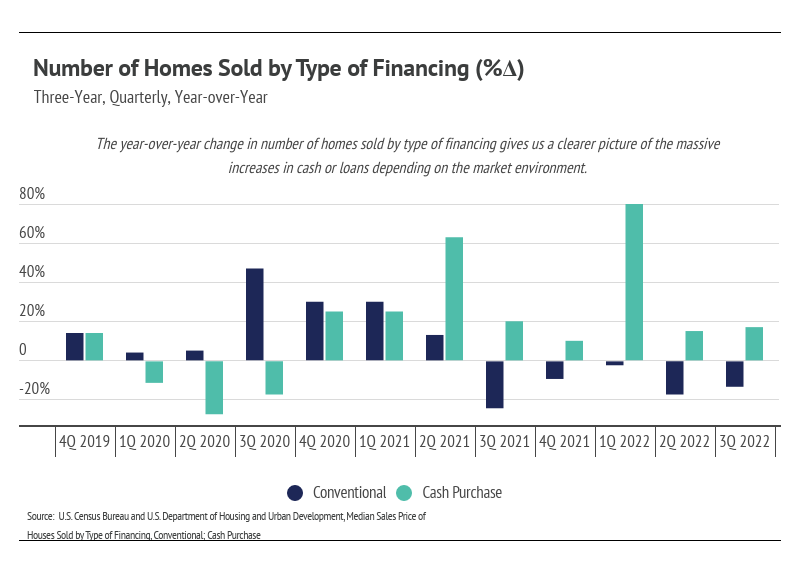 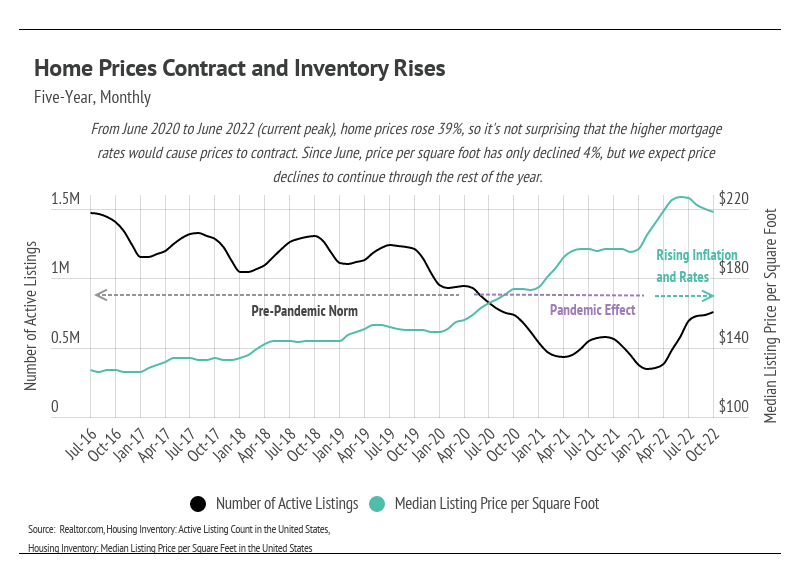 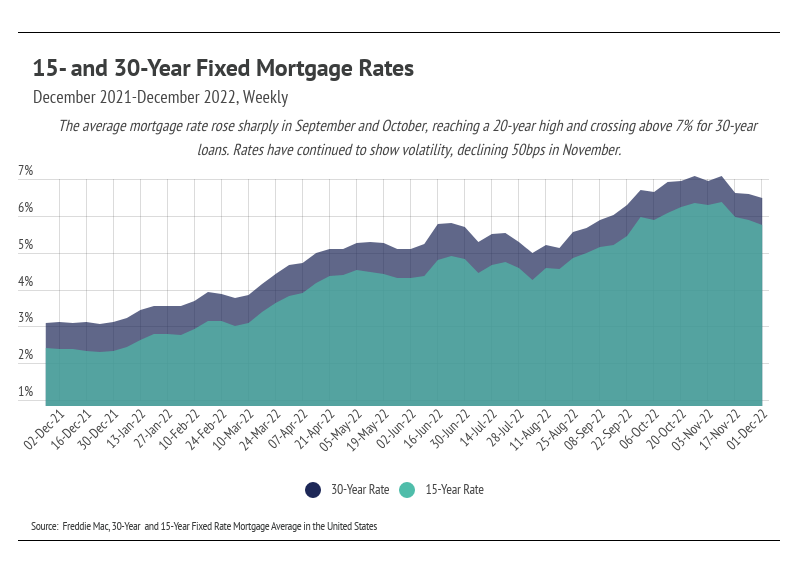 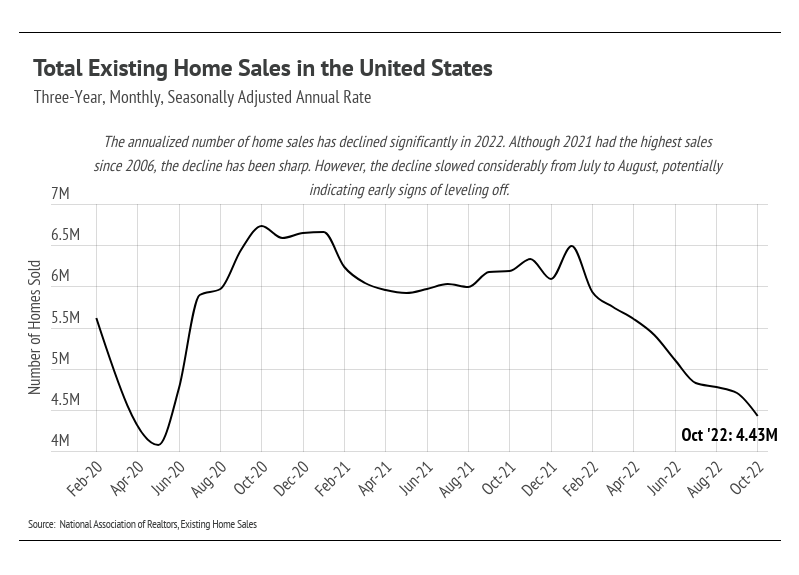 Quick Take:
Note: You can find the charts/graphs for the Local Lowdown at the end of this section.

As we mentioned in the Big Story, the market is cooling on both the buy and the sell sides. When there are fewer sellers, there are also fewer buyers, because some buyers are selling their homes to move to others in the same market. New listings have declined faster than sales, causing inventory to decline near the all-time low level we experienced last winter. However, the key difference is that fewer buyers are on the market — so, even with low inventory, buyers can still find the home that’s right for them. The low inventory has insulated prices from a major reversal. In fact, Sonoma condo prices reached an all-time high in November. Although prices have contracted, especially single-family homes in Marin, they have maintained price gains over the past 24 months with the exception of San Mateo condos, which are now lower than in November 2020.
Moving forward, prices will likely contract slightly more through the winter, which is typical. Without any signs of interest rates dropping, we’re entering a stage of slower, longer-term growth — but still growth. In the short term, prices may come down a little more, however. Real estate has shown itself to be one of the best investments in recent history and is, on average, the largest store of wealth for an individual or family. Price appreciation will likely move to a more normal growth rate of around 5-6% in the coming years, which makes for a much healthier market than what occurred in 2020 and 2021.

Silicon Valley, along with the rest of the country, has not returned to anywhere near pre-pandemic inventory levels after the buying boom last year. We can compare sales and new listings from 2021 to 2022 to see the effects of fewer homes coming to market. Fewer homes and the rising rate environment have dropped demand. Softening demand has brought the market toward balance despite declining inventory.

Months of Supply Inventory (MSI) quantifies the supply/demand relationship by measuring how many months it would take for all current homes listed on the market to sell at the current rate of sales. The long-term average MSI is around three months in California, which indicates a balanced market. An MSI lower than three indicates that there are more buyers than sellers on the market (meaning it’s a sellers’ market), while a higher MSI indicates there are more sellers than buyers (meaning it’s a buyers’ market). MSI has trended higher (from a sellers’ market toward balance) since late spring, but despite the changing market environment, North Bay single-family homes still indicate a sellers’ market, but just barely for Napa and Solano counties. The condo markets in Napa and Sonoma are still in a sellers’ market, while the Marin and Solano markets favor buyers. 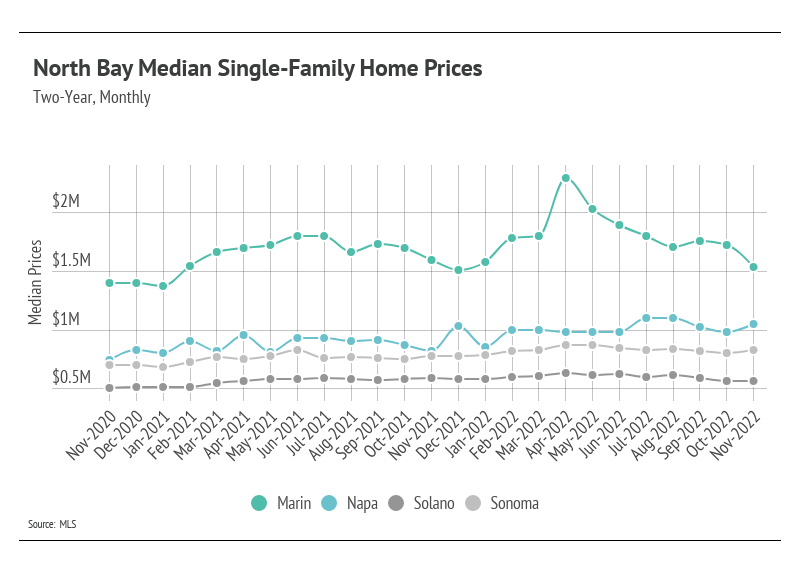 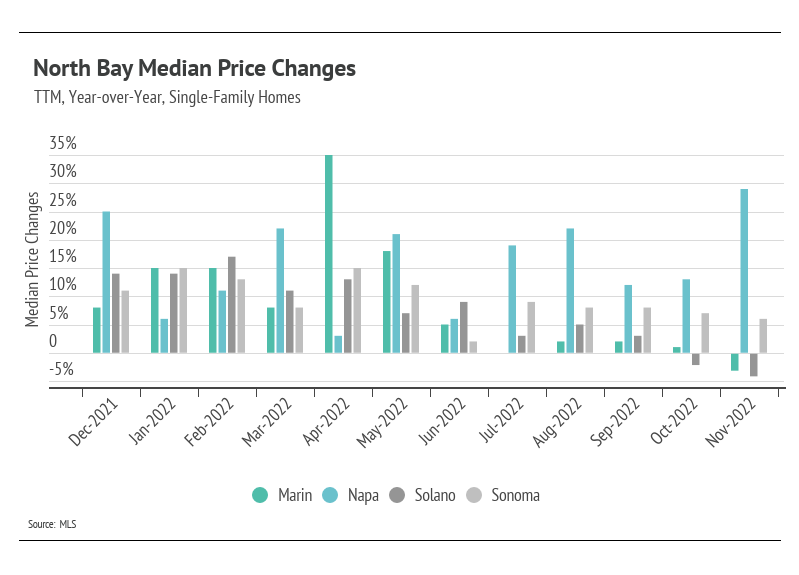 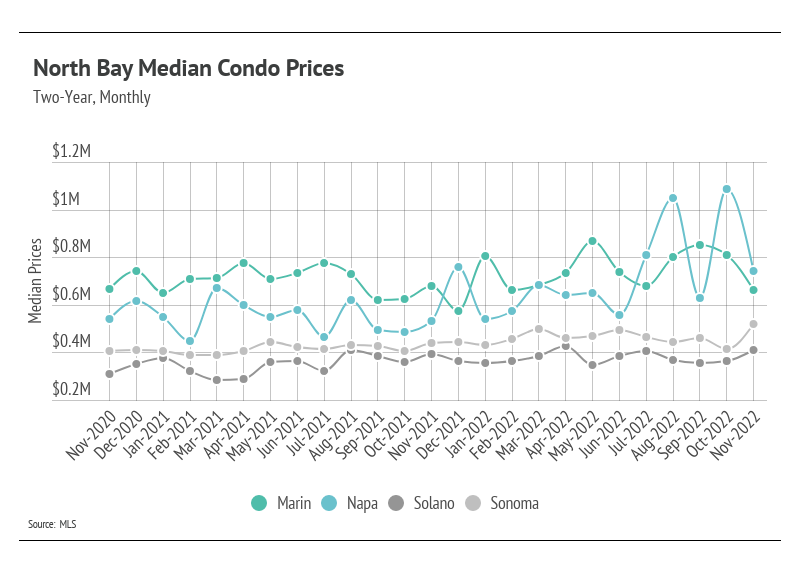 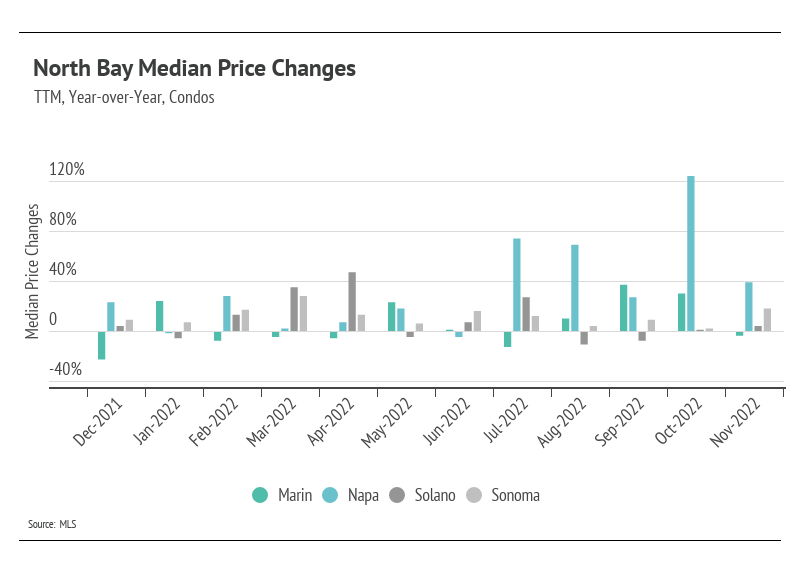 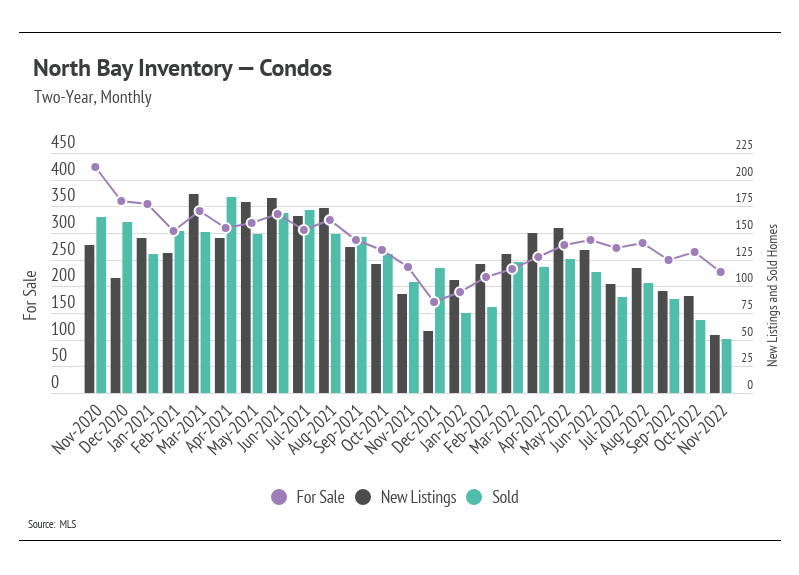 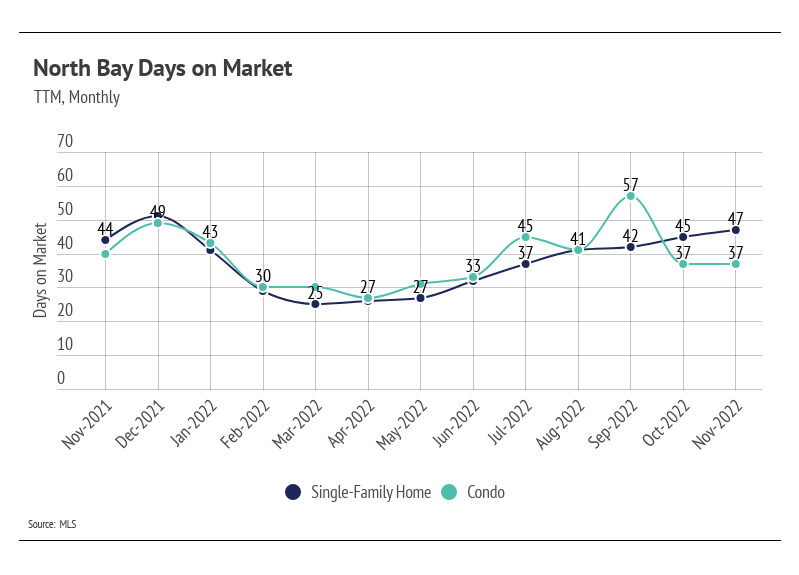 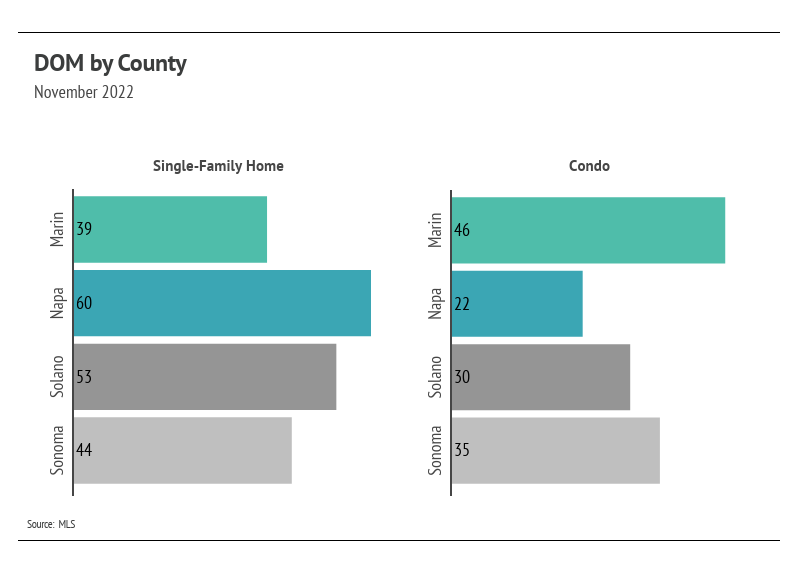 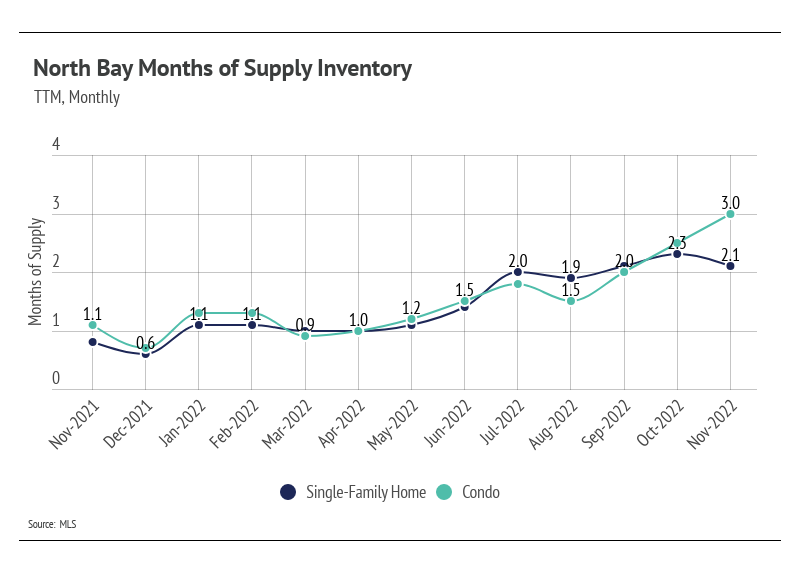 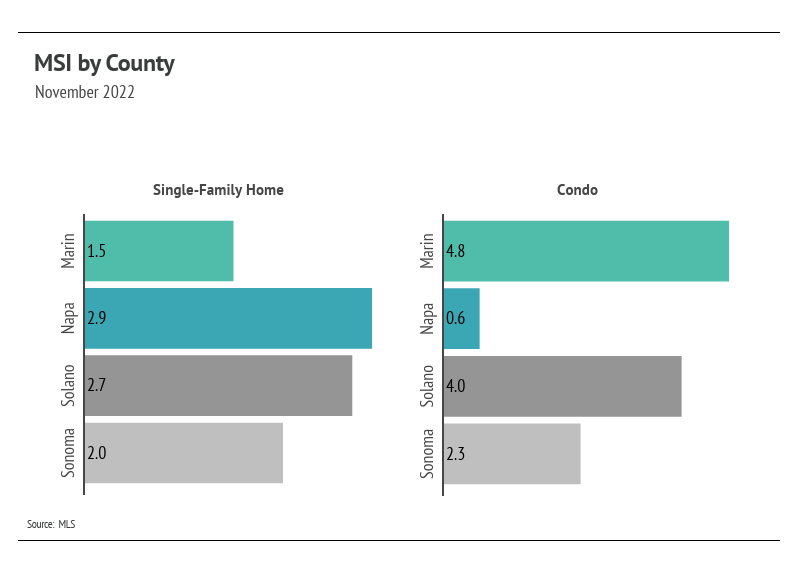 Stay up to date on the latest real estate trends.

You’ve got questions and we can’t wait to answer them.